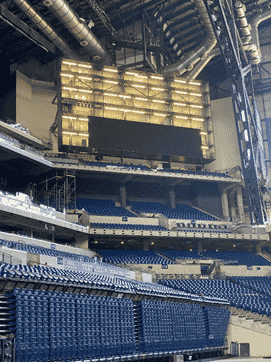 In total, the new Lucas Oil Stadium LED display network will include more than 19,500 square feet of LED displays and 21.3 million pixels.

INDIANAPOLIS, IN—SNA Displays has been awarded a contract to upgrade video boards throughout Lucas Oil Stadium, home to the National Football League’s Indianapolis Colts, by the Capital Improvement Board of Managers of Marion County (CIB). The CIB operates the stadium, which also hosts the Big Ten Football Championship game, concerts, conventions, and other public and private events. Lucas Oil Stadium will host the 2024 U.S. Olympic Team Trials for swimming, making it the first football stadium to do so. Work on display installation has already begun and is expected to be complete in July for Big Ten Football Media Days.

The overhaul is the first display technology refresh since the stadium was completed in 2008 and includes the replacement of more than 50 LED displays. In total, the new Lucas Oil Stadium LED display network will include more than 19,500 square feet of LED displays and 21.3 million pixels.

“Our broadcast engineering staff have done an impressive job of extending the useful life of the existing video displays well beyond the typical life expectancy of seven – 10 years,” said Andy Mallon, Executive Director of the Indiana Convention Center/Lucas Oil Stadium (ICCLOS). “The original video display, which was state-of-the-art when it was installed upon completion of the stadium, gave us 14 years of great service, but replacement parts have become obsolete or very difficult to find and technology has evolved to allow for even higher quality visuals. We want to give our guests the high-quality video experience they expect and deserve, which is what SNA Displays provides, and we can’t wait to have the new displays up and running.”

As part of its scope of work, SNA Displays is recycling all demolished signage material through a local recycling company.

Highlights of the refresh include two 53-foot-high by 97-foot-wide main LED video boards in the stadium‘s northwest and southeast corners and more than 2,000 linear feet of LED ribbon displays. The main video screens will employ a 10 mm pixel pitch, a 417% improvement of clarity compared with the previous 16 mm and 23 mm screens.

Members of the press are invited to view the new video displays prior to final installation.

Because of construction and other work in the stadium, interested parties must RSVP in order to be granted entrance.
Representatives of Lucas Oil Stadium and SNA Displays will be on hand to answer questions regarding the refresh. For context, photos of the video boards may be found on page three.

WJHW, which designed the stadium’s original video and acoustic infrastructure, is providing consulting and design services for the project on behalf of the CIB.

SNA Displays will also provide dual-faced digital marquees on the exterior north and south ends of the stadium, scoring/timing equipment, and fiber infrastructure.

The 50 LED displays that will be installed in Lucas Oil Stadium are all built from SNA Displays’ EMPIRE™ Exterior and BOLD™ Interior product series.

SNA Displays is headquartered in Times Square and has worked with clients to design and build some of the largest and most recognizable digital spectaculars in the world. Discover how Dreams Live Digitally® at https://snadisplays.com.

About the Capitol Improvement Board

The Capital Improvement Board of Managers of Marion County (CIB) is responsible for the marketing, leasing and operation of Lucas Oil Stadium and the Indiana Convention Center. The CIB was created in 1965 by the Indiana General Assembly and empowered to finance and manage capital improvements. Visit ICCLOS.com for more information.