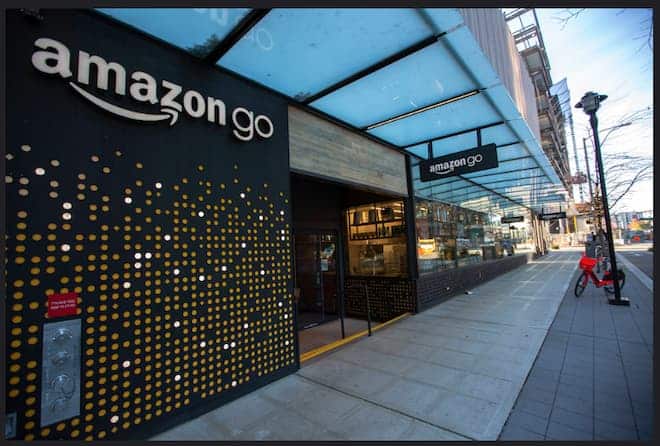 Base writeup on ModernRetail and the subsequent post on Sixteen:Nine

Put together, here’s what we know so far:

Many big retailers have screens in stores that, in theory or practice, could be made available for ads from consumer goods brands that have products sold in those environments. Walmart even has a demand-side ad platform. But Amazon has the wicked combination of very sophisticated and deep data collection capabilities, combined with its very slick, probably best-of-breed frictionless shopping technology.

In stores using Amazon’s Just Walk Out technology, sensors and software have such a grip on shopper behavior they can track what people pick off shelves (and sometimes replace) and complete transactions without any of the normal human or self-checkout processes.

You could maybe argue that Amazon is already kinda sorta vaguely in the digital signage business, in that some networks run off low-cost Fire TV devices, and some operators use AWS cloud hosting. But this is a lot more direct involvement, and tracks to how Amazon generally rolls. They start with subbing out, but gradually build  their own capabilities, like warehouse and fulfillment, data hosting and even delivery trucks and air cargo. Amazon Go’s frictionless tech is the company’s own IP, and now they license it to other retailers.